FOUR BIRDS BY MY DOORSTEP 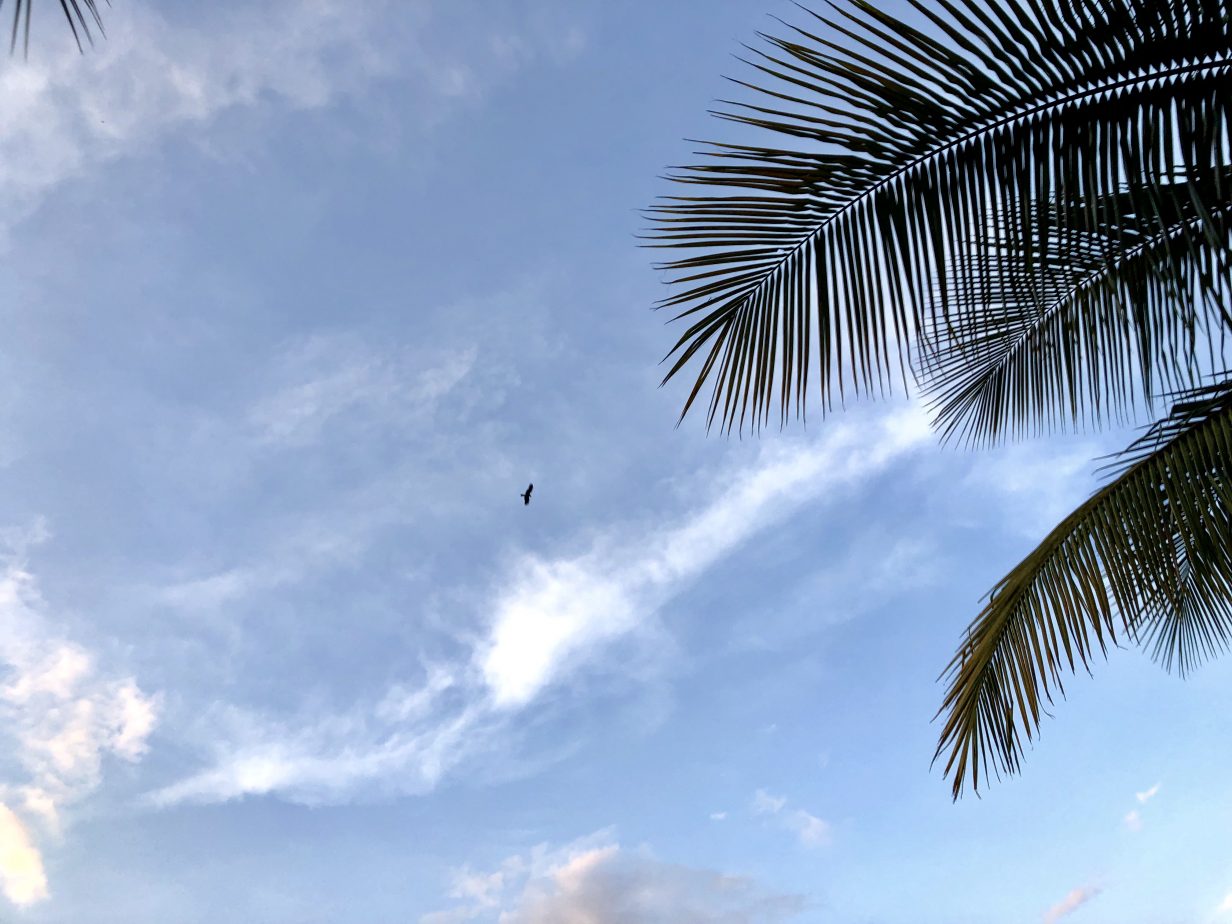 FOUR BIRDS BY MY DOORSTEP

Three weeks of containment already. Three weeks of everlasting fear, everlasting hope of seeing the news broadcast something different from corona virus and everlasting disappointment. Corona Virus and COVID-19 is on every journalist’s tongue. Last week I asked my sisters: today is Tuesday right? The laugher that sprang the before-then-silent-living-room was enough proof of my temporal disorientation. It’s pretty sad but I have lost the notion of time and I constantly check my phone’s calendar to know what day and date it is. I have forgotten the sound of some people’s voices too. Of course I keep in touch with family members and close friends on the phone, but the human acquaintances that were part of my daily life are slowly becoming a mere memory. The workers of the office where I print my academic works, the owner of the small fast-food from which I sometimes buy a fruit juice and hamburger on my way to the university, the woman from whom I buy strawberry flavoured chewing gums etc. These are all people to whom you get used to even if you don’t consider them friends. They are people that can ask you “Hey are you okay? Why do you look so sad today? People who can gift you a product or service with a large and sincere smile put on their face simply because you’ve been a faithful and sympathetic customer. They are people who make you understand that your emotions do not belong just to yourself, that they also belong to the individuals that can read them on your face and empathise. These people are a significant part of your daily routine. A routine that has been altered since the outbreak of COVID-19.

During these three weeks of containment, I have learned to appreciate things that usually go unnoticed. One of these is the environment around my home. Not that I had not noticed the semi-natural and semi urban aspect of the landscape in front of the house, but rather that I had not given it enough attention. I remember awarding time to some afar mountains of the scenery when I was younger and shy. I had decided to give to each mountain the name of somebody I admired. The four mountains were thus baptised Barack Obama, Whitney Houston, Vladimir Poutine and Bryan Adams. My vision by then was to come back from school each evening and have a conversation with these mountains in order to become self-confident. The logic (if at all there was any) of my reasoning was that if I could talk to these influential personalities every day and be friends with them, then there was no reason to be scared of giving a presentation in class. How many people on this planet are chanced to have a daily encounter with Poutine or Obama? Strong me! Lucky me! I think I stopped talking to them when I started becoming less timid, just as when people pray tirelessly to God and immediately forget the prayers when their wishes and desires are granted. God must have witnessed a million times how materialistic and opportunistic the human heart is.

Now that I have more time for observation, I spend a couple of minutes outside. More time to admire the soft salsa between the wind and the eucalyptus trees that stand tall from the swamps that are over 100 meters away from my home. I was told by my cousin, an aquatic ecosystem sciences engineer, that these trees are generally planted on areas where the very wet soils because of their high absorption capacities. These trees are certainly the habitat to thousands of birds, or maybe just their playing ground.  While looking at their gentle dance one afternoon, I saw a flock of four white birds flying in between the trees.  They looked like a representation of peace in times of war, a personification freedom. This same freedom which myself and many citizens of the world have been deprived of by the invisible murderer who has made Cameroon’s most prolific saxophonist, Manu Dibango, its victim.

Unlike these white birds, we are forced to stay home for our own good. Forced to live in captivity with the image of four white birds spreading their wings and flying to an unknown destination as only escape. From the first day I saw the white birds, at approximately 6:17 p.m., I decided that I was going to track them every day. Watching them somehow makes me feel better with the idea of staying in the same environment 24 hours a day, 7 days a week. The second time I saw the four white birds, a particular reggae song came to my mind.

Rise up this morning

Smile with the rising sun

Pitch by my doorstep

Of melody pure and true

Saying : This is my message to you

Singing don’t worry About a thing

Before that moment I had never really taken time to reflect on Bob Marley’s “ Three little birds”. Today I feel the song is simply an ode or recognition of the curative power of nature. A belief that waking up and smiling to the sun while listening to the tweets of the birds can relieve us of our wild and dark thoughts. It has been proven that nature has a relaxation effect on humans and could therefore be an alternative or complementary solution to mental health issues like stress, anxiety and depression.  I guess I will have to come out to watch the birds more often than I already do since we are yet to know when the global pandemics will come to an end. Containment can be very stressful for people who are always on the move. I can’t imagine how claustrophobes are feeling now.

One evening, after I had missed the four white birds, I decided to stay out and watch the other species of birds to amend or my discriminating passion for just the white birds. I stood outside till night and watched as people gradually put on the lights at their homes thereby building a difference between Barack, Poutine, Houston and Adams (the mountains). One of these four mountains (Barack) had a lot of houses built on it while the others still wore their virgin forests. Sometimes I thought that during the day Barack would be mocked at by the other mountains because he could no longer enjoy the peace and tranquillity of nature.  Luckily at nightfall he would backfire the mockeries of the others because due the numerous lights in the houses, he became the only mountain that could be seen and admired in darkness.

During my new afternoon ritual, I noticed that there was a bat roaming around one of the coconut trees beside our house. That made me think of our Minister of Scientific Research who has been subjected to mockery by internet surfers for asking people to stop the consumption of bat, pangolin and snake meat because these animals can become potential carriers of the virus. According to the minister, if we fail to do that the pandemics may become a hecatomb in Cameroon. As I watched this bat fly near the coconut tree, I thought back of the four white birds. The four white birds as well as the bat may not know what’s happening on earth but they can ben compared in one way or the other to us. Some people have been living this containment period in better social conditions than others. Some stay at home with their family members and can therefore still enjoy a social life whereas others have no other option than being like the solitary bat, all alone. The solitary bats have just their phones to connect with their loved ones and enquire about each other’s health. The Covid-19, or rather the fear of death has made us realise the worth human life and how it is spent. People have paused from the marathon of achieving their dreams and are now reviving and cherishing their bond with family and friends through the internet and phones. A bittersweet phenomenon.

My sister who has been very sceptical of my sudden love for the white birds once told me: your friends won’t pass by today; they’ve had an accident on their way. Her sentence felt like a revelation (haha): If the birds pass by each day between 6:00 and 6:30 p.m., then it would be logical that they pass by in the opposite direction each morning too (me and the logics again).  To prove myself right, I decided I was going to wake up at 5:30 a.m. to check if the birds pass by in the morning too. I woke up at 6:30 a.m., it was too late. I had trusted my body’s natural clock alarm and it had disappointed me. The next day I woke up at 4 am and went outside at 5:30 a.m. I stood there, waiting for my friends the white birds. For a split second I thought I was taking it too far, I was waiting for a flock of birds whose species I didn’t even identify since they flew too far for me to recognise their distinctive traits. I was standing in the dawn with the cold morning and sounds of crickets and frogs as only company. I had been waiting for twenty minutes already and I was losing patience. I feared that their morning itinerary may be different from the afternoon’s and I was starting to lose hope of confirming my theory. If not for the containment, I would probably never had developed an interest for the birds and I would be either in bed or getting ready for school. Instead I was abandoning the comfort of my bed to uncover the mystery of the birds’ journey (I might have been an Ornithologist in a previous life). At 6 a.m. the early birds were already tweeting and flying. At 6:10 a.m. I found myself singing Bob Marley’s song thinking it would make the birds come faster (how superstitious). 6:12 a.m. (Oh my God!) I saw a first white bird, then two others. I was in total bewilderment and I almost shouted: hey I knew you were going to come! I was so happy about my discovery that I ran to the house to wake my sisters up. Of course they got mad at me for disturbing their sleep, but it didn’t stop me from being elated throughout the day while waiting for the birds to pass by in the afternoon.

So this is what containment has done. It has pushed me to award more time to nature and has thereby pacified my mind from the trauma of status quo, It has made me recall the days of my life when I was shy and how I managed to overcome the timidity and become fearless of people’s looks and opinions. It has made me express my gratitude for living in containment with my sisters unlike like people who have to go through this alone. And it has thought me that our bodies are obliged to stay home but not our minds. After a bit of introspection and observation of our environment we can all come up with interesting activities and projects that can be executed even while respecting social distancing. Above all, containment is giving me enough time and ideas to prepare for the back-to-normal-life days.